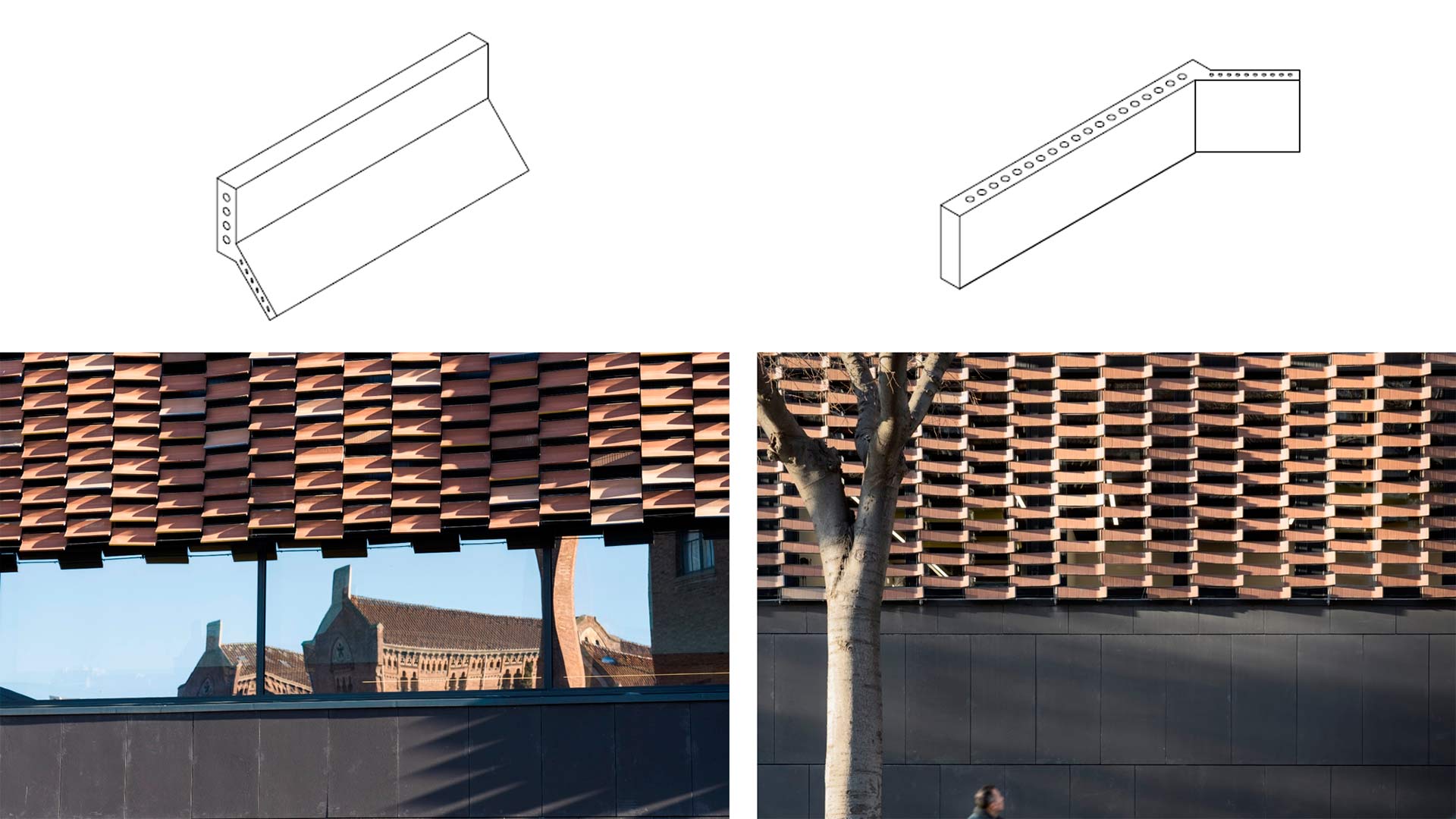 Role of the studio: Architectural design and bioclimatic facade design

The recently inaugurated Santa Creu i Sant Pau Research Institute is typical by its façade that consists on an impressive dress of ceramic pieces, which contributes to a perfect integration with the Modernist complex of the Sant Pau Hospital but also constitutes a bioclimatic feature that allows comfort and energy savings.
The new headquarters of the institute, of 9,700 sqm is the result of the collaboration between the PICHarchitects_Pich-Aguilera and 2BMFG Arquitectes offices.
The ceramic textile provides privacy to the researchers and has folds that protect the building from solar radiation, thus diminishing significantly the energy cost. These folds make, from some points of view, that the polychrome interior mosaic appears outside. Thus, the innovative construction technology of ceramic textiles generates effects of transparency, colour, brightness and texture, making it possible for the façades of the building to be related to the historical architecture from contemporaneity.

The external side of the ceramic pieces was treated with several tones of clay, similar to those of the bricks of the surrounding buildings in the hospital. Four natural clay colors were used to match with the diversity of colors of the traditional building façades.

The ceramic pieces composing the façade are vitrified at their interior face. Their colours are distributed in a kind of mosaic, in an aleatory way. This approach has been suggested by the visual pattern of the French post-impressionist artist Georges-Pierre Seurat, in particular by his painting “A Sunday Afternoon on the Island of La Grande Jatte”. The painting is an extraordinary example of the technique known as pointillism. The tiny juxtaposed dots of multi-colored paint allow the viewer’s eye to blend colors optically, rather than having the colors physically blended on the canvas.

In collaboration with the Flexbrick team, the architectural team designed a sunscreen with greater depth than the one Flexbrick usually provides, and incorporated a new fold on the piece. This requirement originated the dialog with the industry and lead to the evolution of the Flexbrick system.

A research and development process took place in order to define the final shape of the ceramic piece. It included interactive design, teamwork, samples, testing and optimization. The final shape of the ceramic pieces changes according to the orientation of the façade they are located in, in order to adapt to the solar conditions. The design approach is based on the fact, that the South façade receives more radiation from higher sun positions, while the East and West facades counts with lower angles of the solar radiation. In order to avoid over-heating of the building, most of the incident solar radiation should be avoided. Considering these two basic assumptions, which were later justified by energy simulation and solar studies, two different shapes of the ceramic piece were proposed.

Due to the Cerda’s plan for Eixample of Barcelona, the building counts with S-E, S-W, N-E and N-W orientation. For the S-E and S-W orientation, there is an additional sweep that starts at the lower edge of the original element and continues in a 45º inclination, as if facing the sun. The resulting geometry is optimized in order to prevent direct incidence of the solar radiation, but allow diffuse daylight to enter the interior spaces.

Similarly, the original Flexbrick element is optimized and designed for the North-East orientation, with the objective to decrease the cooling demand of the building by protecting it against the solar gains. In this case, the lower sun angles are predominant, which leads to application of additional vertical shading sweep.
The efficiency of this solution has been proved by a solar study, analysing the incident solar radiation to the glazing behind the ceramic skin of the façade.